But what if I’m a vegan? 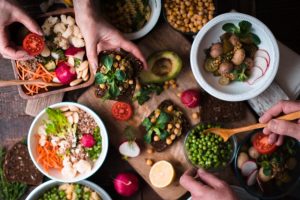 Sometimes when people seek my help they want to make sure I know they avoid animal products in their food plan.  This stipulation should never be a reason to avoid any food plan…but it can be difficult if you don’t understand your plant sources well.  The real key to any food regime is how you plan calories, organize macronutrients (protein, carbohydrates and fats) and avoid foods to which you are sensitive or allergic.  At the end of the day, if your digestive system is working, you should be able to break food down into all the building blocks you need.  The key is knowing where to get the building blocks.

Although I teach a mostly plant-based program with animal protein sources as the primary protein choices, I am not opposed to all plant-based plans.  I do teach patients they need to get all the amino acids into their diet and especially look for the essential amino acids as well as the branch chain amino acids.  Having all of these make complete proteins for your plan.  The problem is a majority of plants are incomplete proteins.  With that I mind, we need only combine plants so we can have all of our proteins by the end of the day.  Usually, this is done by combining a seed or nut with a grain and a legume.

Although animals do present complete proteins, there are some other great options if you want to stay completely plant-based2\

A food so healthy that NASA hopes we’ll grow it on interplanetary space flights, quinoa looks a lot like couscous, but it’s way more nutritious. Full of fiber, iron, magnesium, and manganese, quinoa is a terrific substitute for rice and it’s versatile enough to make muffins, fritters, cookies, and breakfast casseroles.

Buckwheat is, in fact, not a type of wheat at all, but a relative of rhubarb. While the Japanese have turned the plant into funky noodles called soba, most cultures eat the seeds by either grinding them into flour (making a great base for gluten-free pancakes!) or cooking the hulled kernels, or “groats,” similarly to oatmeal. Buckwheat is crazy healthy: Some studies have shown that it may improve circulation, lower blood cholesterol, and control blood glucose levels.

Relax this hemp won’t get anyone stoned. This relative of the popular marijuana plant contains significant amounts of all nine essential amino acids, as well as plenty of magnesium, zinc, iron, and calcium. They’re also a rare vegan source of essential fatty acids, like omega-3s.

Chia are the highest plant source of omega-3 fatty acids, and they contain more fiber than flax seeds or nuts. Chia is also a powerhouse of iron, calcium, zinc, and antioxidants, but the best thing about these little seeds is they form a goopy gel when combined with milk or water. This makes them fantastic for making healthy puddings, thickening smoothies, or replacing eggs in vegan baking.

While beans are normally low in the amino acid methionine, soy is a complete protein and thoroughly deserves its status as the go-to substitute for the meat-free (but go easy on the processed varieties).   Although soy usually creates some intense emotions due to its label as a phyto estrogen…as a food it is complete.  Tempeh and natto are made by fermenting the beans, but tofu is probably the best-known soy product. If protein is a concern, it’s important to choose the firmest tofu available—the harder the tofu, the higher the protein content.

“Take wheat, barley, beans, lentils, millet, and spelt, put them in one vessel and make them into bread for yourself.” This fragment of Ezekiel 4:9, while initially intended to help a besieged Jerusalem make bread when supplies were low, turned out to be a recipe for an extraordinarily nutritious loaf that contains all of the essential amino acids. It’s also usually made from sprouted grains, a process which significantly increases the bread’s fiber and vitamin content, as well as its digestibility.

Originally developed to combat global food shortages, mycoprotein is sold under the name “Quorn” and is made by growing a certain kind of fungus in vats and turning it into meat substitutes that are packed with complete protein. Admittedly, it’s a little weird-sounding, but mycoprotein is sometimes considered part of the mushroom family, and while there are some allergen concerns, only one in 146,000 people experiences adverse reactions. To the rest, it’s pretty darn tasty. Since it’s usually bound together with free-range egg whites, Quorn is not technically vegan-friendly, but the company does have some vegan products.

One of the simplest, cheapest, and vegan-est meals in existence is also one of the best sources of protein around. Most beans are low in methionine and high in lysine, while rice is low in lysine and high in methionine. Put ’em together, and whaddaya got? Protein content on par with that of meat. Subbing lentils or chickpeas for beans produces the same effect. These meals are a great way to load up on protein and carbohydrates after an intense workout.

Wheat gluten gets demonized by a lot of people these days, but with the obvious exceptions of celiac-sufferers and the gluten intolerant, it’s nothing to fear. First created more than a thousand years ago as a meat substitute for Chinese Buddhist monks, seitan is made by mixing gluten (the protein in wheat) with herbs and spices, hydrating it with water or stock, and simmering it in broth. But this one’s not complete on its own—it needs to be cooked in a soy sauce-rich broth to add gluten’s missing amino acid (lysine) to the chewy, very meat-like final product.

Contrary to popular belief, this species of the algae family is not a complete protein, since it’s lacking in methionine and cysteine. All that’s needed to remedy this is to add something with plenty of these amino acids, such as grains, oats, nuts, or seeds

In the end, balance is key

Often, the real challenge with vegan choices is combining your foods to get enough protein in your day.  Hopefully with these suggestions, that challenge will be behind you.  Remember the focus is your calories, your macros and avoidance of food sensitivities… you can do this and still stay vegan!